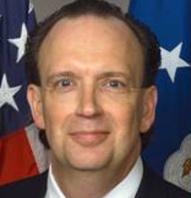 Previously, Bill was appointed by President George W. Bush and confirmed by the United States Senate to serve as Assistant Secretary of the United States Air Force for Installations, Environment and Logistics, and the Air Force's Senior Energy Executive, based at the Pentagon in Washington, DC. As Assistant Secretary, he led an organization with responsibilities that included installations, military construction, base closure and realignment, environment, energy, safety and occupational health issues, and all logistical matters. Most notably, Bill led Air Force efforts to test, certify and fly alternative aviation fuels, and to develop renewable electric generation facilities for U.S. military installations. For his efforts, Bill was presented the Decoration for Exceptional Civilian Service and the Presidential Award for Leadership in Federal Energy Management.

Born in Syracuse, N.Y., Bill is an honors graduate of Washington College in Chestertown, Md., and earned his law degree with honors from Syracuse University. He has also studied in the master's program for international business at the University of Miami. Bill is a member of the Maryland Bar.

An avid bicyclist, he organized the U.S. Air Force Cycling Classic, a nationally sanctioned annual pro cycling event in Arlington, VA, and served on the Leadership Advisory Board for the race. Bill continued his commitment to our veterans and their families by serving as a member of the Board of Directors of the Raisin Hope Foundation, an organization focused on raising awareness of traumatic brain injuries and supporting survivors of TBI, including our wounded warriors. He also served as Senior Advisor and Spokesman for The Military Appreciation Partnership, an organization dedicated to providing entertainment opportunities to our warfighters downrange, their families, our veterans and our disabled warrior heroes. Bill served on the Business Executive Advisory Council for the Department of Business, Management and Accounting at the University of Maryland Eastern Shore. He is a regular contributor to Second Line of Defense, an online defense magazine, and is a frequent presenter at professional defense, engineering, leadership and energy conference